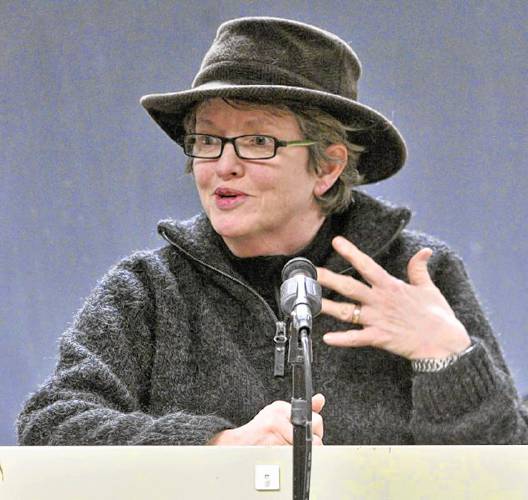 Four years ago, I wrote a column about meeting my birth mother for the first time. I remain in contact with her, and I have also found new appreciation for my deceased adoptive parents and the cousins who I remain very close to in my adult years. When I told those cousins I had found birth relatives, they offered much support while reminding me I belong to them. I still smile as I recall their claim to me.

When I embarked on my search, three women were instrumental sources of practical and emotional support. Deb Blanchard has been an honest and compassionate mother figure and friend to me. Her book, “Love Never Leaves,” is a new release available on Amazon. When Deb originally helped me, I did not know her painful story about giving up birth children and then more joyfully adopting her second husband’s daughter.

The first part of her book is a memoir, and the second part is a collection of essays from people on the triad — birth mothers, adoptees and adoptive parents. I feel honored that she included a quote from me on her book cover, and I am in awe of her life’s work to serve all sorts of people on the triad. Buy and read this book!

Paradoxically, a book about making the choice to not have children was also brought to my attention recently. Verena Brunschweiger is a German philosopher, environmentalist, feminist, teacher and writer. Her previous books are in German, and one of them, “Kinderfrei Instead of Childless,” gained international attention and reached number 40 on the prestigious Spiegel list for nonfiction books.

Her new book, “Do Childfree People Have Better Sex,” is Brunschweiger’s first English language book. Despite the provocative title, the book is most focused on the practical environmental and the political feminist reasons to choose not to procreate. She advocates for anti-natalism as an imperative on a planet with limited resources. She also writes about the exploitative nature of procreation from a feminist perspective, and she offers philosophical and ethical analyses to argue that the most responsible choice for humans is to interrupt the pattern of compulsive procreation. Brunschweiger loves children and is a dedicated teacher, and yet she has received serious threats to her safety and life over the last few years with accusations of being the equivalent of a baby killer.

Much as the anti-choice movement in this country is rife with white supremacist influences — to increase population — in Germany a nationalistic pro-natalist culture may not be as overtly racist as during the Nazi regime, but it is insidiously normative. Brunschweiger’s book makes no apologies, has no filters and is too honest and real for people who feel threatened by a perspective that questions a universal status quo. I highly recommend this book.

My parents did not make me feel that I was any less their daughter because I was adopted. While I had a fractured relationship with my mom, she had admirable qualities along with destructive tendencies. I am grateful that I was able to help her and my dad when she was seriously ill in her final months.

Perhaps because of how “adopted” was only a word in my life, I am a big proponent of adoptive parenting. I do not understand why more couples do not adopt children in need rather than going through all sorts of medical difficulty and expense to get pregnant. Brunschweiger explains this as a high form of narcissism — the desire to create a “mini-me” and to not quite die. DNA is not the entire story though. I am the result of my upbringing as well as some inclinations that may be explained by the accident of my birth.

As I reflect on the upcoming Mother’s Day, I consider all of the women who have somehow adopted me at different points in my life. To me, they have been real mothers when I needed them. Aunt Mary, Marion, Cathy R., Deb, Sheila, Mary M., Glenda, and TJ — thank you.

I also applaud the women who are childfree by choice. We may choose to rescue animals, to tend to Mother Earth, to teach or to advocate for people in need. Instead of idealizing motherhood, we can recognize all of the women in our lives who have mentored and inspired us. And of course we can thank our mothers, too.